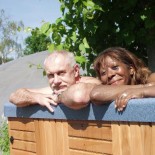 Radlett is the UK's best established and popular swinging house party venue. Perfect for newbies and experienced swingers alike. Read the site then call us on 07986 288580 with any unanswered questions.

Latest News – This weekend and NYE

September parties. I had suggested that September might break records. Friday and Saturday were our biggest ever outside new years eves. Saturday clocked up 192, including 20 from SPICE (James gave a fantastic schedule of surprise cabarets etc.) and 38 from Interaction. Commiserations to those who went elsewhere or, worse still, stayed in.

Channel 4 documentary with Jon Richardson of 8 out of 10 cats. We still haven’t had time to watch the video but all the feed back is that we will like it. Around 60 people coming to September’s parties said they were coming as a result.

OAPs behaving badly. Within moments of the C4 broadcast, C5 wanted a piece of our action and sent Barcroft productions to beg for a documentary. They have been commissioned to do a 6 x 1 hour series on how retired people just won’t slow down. Their current title is ‘OAPs behaving badly’. I will lobby for ‘NOT the evening of their lives’. They want to film over 60s out performing their youngers. They already have bungee jumpers, hells angels, scary ride junkies. Trouble is, I’ve been 26 ever since I was 12 and I expect you are all the same. In the unlikely event that any over 60s do come here and are prepared to broadcast their energetic youthful life style, please make contact. I hope we can manage something for them, because a steady stream of TV appearances will secure this venue’s supremacy over all those wannabes. Barcroft have described several ways of filming parties anonymously (such as filming feet!). Given the Halloween theme, why not use a mask for being incognito?

stop press: Barcroft will be conducting research here at October’s parties and will be equipped to record anyone who wants to be part of their show – and obviously not anyone who doesn’t. The current plan is that November parties will be the mainly filmed event. Usual assurances apply – no one will be recognisable unless they ask to be.

Themes for October parties. No brainer here. How about Halloween?

New Year’s Eve. The first 20 places have already been snapped up but Couples committing and paying in advance can still get £20 discount from the at the door contribution (if any spaces are left) of £80. To allow you to pace yourself for this big one, see how we are changing the schedule in ‘dates’. Three parties in 5 days would be indulgent and knackering for revellers – not for us though as we are bionic. Those who need a pre-Christmas fix can book at the BMFC here on the 20th. Stalwarts can get back into the rhythm with a small party here on 27th.

NYE formula here is well established – black tie (plus the occasional kilt and mask), fireworks, midnight fizz on us, live link to Trafalgar Square, whole roast hog and lamb, No throwing out time, hot tub and pool. Couples and single ladies only except for 5 places auctioned for charity to sophisticated single guys. You would need psychiatric help if preferring to be anywhere else!

Menu. Janet plans for this month:

Home grown and made award winning:

Toast and coffee for the après party gossip breakfast

Hi Richard,
Saturday was only my second visit to Radlett, but another amazing experience. Lots of fun-loving and welcoming people were in attendance, giving a great atmosphere in the living room, kitchen, dining room, corridor, garden, pool and attic-dungeon! Speaking of which, we loved the dungeon room! The swing is huge fun and I now have to find a way to affix my own at home somehow.
The roast pig was superb with crackling to die for.

PS. Thanks again for letting us camp in the field

I absolutely loved it both nights.

Thank you so much, you are wonderful hosts.

Hi,
Saturday was only my second visit to Radlett, but another amazing experience. Lots of fun-loving and welcoming people were in attendance, giving a great atmosphere in the living room, kitchen, dining room, corridor, garden, pool and attic-dungeon! Speaking of which, we loved the dungeon room! The swing is huge fun and I now have to find a way to affix my own at home somehow.
The roast pig was superb with crackling to die for.
The only problem I had was stubbing my toe on an eye-bolt in the pool room, which has swelled, turned purple and now resembles an aubergine! It certainly didn’t spoil my time though! (alcohol may have dulled the immediate pain of course).

PS. Thanks again for letting us camp in the field

yes, I came on the Friday. It was wonderful seeing Baz again and he was on good form. We never lost touch. I have been watching the TV interviews you made and have finally understood the attic room having seen you explain whats up there.

I brought a friend and we had some fun with another in the shed. Its been a while since I last joined the party and since I felt welcomed to the party. I really enjoyed it.

This site uses Akismet to reduce spam. Learn how your comment data is processed.